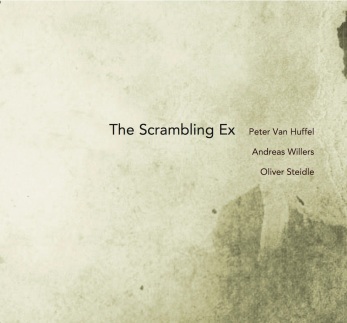 A bass-less trio consisting of three forward-moving, attacking players may seem a little bit like a football team without a defence. Fear not though, The Scrambling Ex from Berlin are never prone to expressionistic overflow or (even worse) shallow, over-regulated boredom. Sheer ability combined with musical intelligence enables them to literally cover all bases.

TSX – a collaborative trio fresh from the thriving and international music scene of Berlin, Germany – is a group that dedicates itself to composed material linked by enticing free-form improvisation. Guitarist Andreas Willers (.AAA., Sonic Finder, Grid Mesh) and drummer Oliver Steidle (Soko Steidle, Der Rote Bereich, Klima Kalima) are both musicians with an outstanding reputation in Germany and across the European jazz scene; each are known for their individualistic musical styles and their unique and powerful instrumental approaches. Canadian saxophonist Peter Van Huffel (Gorilla Mask, House of Mirrors, Boom Crane) – who rounds out this trio – began his performance career on the Canadian and New York jazz scenes and has been consistently building an active profile across Europe since his move to Berlin in 2008. Together this ensemble delivers a colourful and unique approach in dealing with what can be called modern day jazz composition, based on a soulful energy deeply routed in the intuitive process of spontaneous musical creation.